I see from my page of stats that many of my readers have been reading my essay on Oxford and Astrology, so I thought it might be of interest to dig into his chart. A basic natal chart consists of three things, location in space re longitude and latitude, location in time re month and year, and the time of day. With Oxford we can be certain about the first two, but, as is often the case, there’s no nothing on what time of day he was born, so if it’s to be useful, such a chart must be “rectified.” There are many techniques for this; mine may be rather unusual, but it seems to have worked, as it fits him to a T. 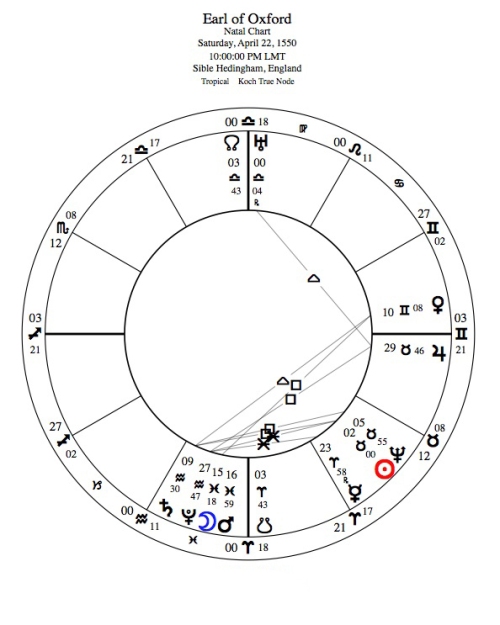 We also know from many hints throughout the plays that Oxford took Astrology seriously. When stopped on the road leading to Dover, having learned that his mistress had just given birth to his son in one of the Queen’s chambers, dreading what he knew would be jail time at least and probably much worse, as Alan Nelson reports (Monstrous Adversary, 268), his rather lame excuse for running away was that he could see from his “nativity,” that trouble was coming his way. It would seem the “nativity” was accurate, since the unfortunate appearance of the infant ended his father’s golden years at Court.

Oxford was living at a time when the ancient interest in the stars had begun to shift from Astrology to Astronomy. A growing suspicion that Astrology might be nothing but pagan superstition, plus a rising evangelical prejudice against anything that didn’t confirm the Christian Bible, the West was beginning to question the validity of Astrology, which doesn’t mean that a great many scientific-minded individuals were not ready to reject it. That Oxford’s tutor, Sir Thomas Smith, was fascinated with it is clear from what his biographers tell us, and from the fact that he owned the kind of professional books of star locations known as ephemerides, needed for casting horoscopes, goes far to explain the almost professional depth of the astrological knowledge revealed in Shakespeare.

But Oxford’s chart would not have been the one we have today, since it would not have included the outer planets, Uranus, Neptune, and Pluto. Because what was known at that time was still limited to the seven that could be seen by the naked eye, for astronomers over the centuries up to the sixteenth, knowledge of the planets ended with Saturn, source of the many references to the “seven turning lights,” the so-called “Seventh Seal,”  The Seven Pillars of Wisdom by T.E. Lawrence, or lines like these from The Rubiyat of Omar Khayam (trans. Edward Fitzgerald):

Up from Earth’s centre, through the Seventh Gate
I rose, and on the Throne of Saturn sate;
And many a Knot unravel’d by the Road;
But not the Master-knot of Human Fate.

It was, of course, the philosophical attempt to “unravel” that “Master-knot” that led men like Khayam, Smith, and Shakespeare to study Astrology. Known to its followers as “the Mother of all Sciences,” Astrology stands at the center of all systems, which, following the European Renaissance, branched out during the Early Modern period into separate sciences: mathematics, astronomy, music, chemistry, pharmacology, animal behavior, history/myth, etcetera.

As the central pillar of the Wisdom Tradition, it came to England originally from the Middle East with the return of the Crusaders, from the lands around the Mediterranean whose languages shared a common basis in Latin, and many also in Greek. The earliest record of the Tradition in the West begins with Pythagoras, then to Socrates via Plato, then to the Renaissance and the Florentine neoplatonist, Marsilio Ficino, who, born into Catholicism, was forced to wrestle with the knotty problem of reconciling Plato with St. Augustine.  But I digress.

Oxford must have felt rather badly about his horoscope, for it’s these three as yet undiscovered planets, particularly Neptune and Uranus, that reveal the dynamic power of the moment when he ventured into the world plane. Without these, it seemed that all his planets but Venus were located below the horizon, with Venus only a few degrees above it in the 7th house, signifying a life lived outside public notice, ineffective in the wider world of public events, a life buried in local concerns, which, interestingly, is where he’s been located ever since by History, and where the public must have seen him, or rather not seen him, over a lifetime spent hiding his connection to the London Stage. Perhaps it’s this, contrasted with the driving force of his mission to educate and empower his audiences, that made him question the truth of Astrology through things like the fate of Brutus or its dismissal by a villain like Edmund in King Lear.

With Uranus located at the highest point in his chart, the Midheaven, increased in power by its conjunction to the Moon’s North Node, rather than remain forever unknown to a wider world, Oxford not only qualifies as a potential genius, but one whose posthumous reputation must eventually be spread to all levels of renown (the 10th house rules the posthumous reputation). While Uranus has only one strong aspect, a trine to Jupiter, because the latter is in the 6th house within four degrees of the cusp of the 7th, the house of partnerships, it signifies support from powerful patrons that, throughout his life, proved essential to the Bard’s protection and survival.

That all the rest of his planets are tightly contained within a trine from Venus to Saturn suggests one whose life, for the most part, was closely contained within a tight circle of friends and interests. That his main interest is writing is suggested by the four planets in the 3rd house of communications, siblings, friends, and short trips; his one long trip, his year in Italy exploring the Mediterranean, indicated by the fact that only Uranus, in the 9th house of long distance travel and higher education, falls outside this tight little group.

That the bundle formed by the rest of his planets is led by Venus speaks to Love as the central theme of all his work, the force that carried him through the dark days (represented by their aspects to Saturn and Pluto in the third), and that his national audiences felt for him as the creator of their happiest moments, though most were unaware of his identity. His 3rd house, one of the biggest in his chart (due to England’s location so far from the equator, containing all of both Aquarius and Pisces) as the house of close friends and relations and personal communications, is the only one located on the left side of the chart, the side of personal strengths and energies, as opposed to the majority on the right side, reactions to outer forces.

With the addition of Neptune (not discovered until 1846) we learn a great deal about our man, for this most artistic and emotionally attuned to nature of all aspects is conjunct his Sun. The sign of one who is attracted to music, often to a career in music, it also suggests his attraction to the sea and to large bodies of water: the Thames, where he spent his childhood, and the Mediterranean, where he spent the most exciting and rewarding year of his life. Located in the 5th house of sexual relationships and creative efforts, it defines the nature of his works, the subtle weaving of meaning, feeling, sound and image that has set such a high bar for all English-speaking poets and playwrights ever since. Neptune conjunct the Sun often defines one who will sacrifice everything for his or her art, or one who has a hard time dealing with the more mundane aspects of life, things like earning a living and paying the mortgage. Such people tend to let others deal with such things, but they are usually so charming that this presents no serious problem.

Most interesting of all, however, may be the tight conjunction of his Moon with Mars in Pisces. With a fish as its glyph and the sea god Neptune as its ruler, the sign Pisces signifies how forms and structures tend to disappear in a world of perpetual change. Pisceans tend to prefer staying out of harm’s way, working behind the scenes, vanishing beneath the surface when trouble threatens. It is a good place for the Moon, but where the Moon is so closely tied to Mars, the planet of anger and violence, the emotions intensify to such a degree that they must be released. Thus, when driven by fury at the Queen and Burghley, rather than plotting with his Catholic cousins to overthrow the government, Oxford takes his revenge by writing Hamlet, Timon, Julius Caesar, and Coriolanus.

There is a great deal more to be said about this chart as a means of understanding both Oxford and Shakespeare, but these are some of the most important points, in particular the hope offered by that powerful outlier, Uranus on the cusp of the tenth, that he will eventually be seen as, not just the author of the Shakespeare canon, but as the founder of today’s modern media, the all important Fourth Estate of a civilized government. It encourages us to keep at it. Our day will come, and so will his.

This entry was posted in Shakespeare Authorship. Bookmark the permalink.