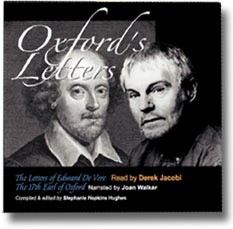 This 2CD set provides the best entry to date into the world of Edward de Vere, Earl of Oxford, the sixteenth-century courtier poet whom many believe was the true author of the Shakespeare canon. Here in his own words we can hear for ourselves this writer and poet speaking personally to contemporaries. All but one or two of these letters were written to his in-laws, the Cecils, whose saving nature we have to thank that they survived. Certainly he must have written many letters to friends and other family members that have not survived.

Complementing the familiar voice of Sir Derek as Oxford are those of several other accomplished English actors. Joan Walker’s narration connects the letters with the events of Oxford’s life as they unfold, while letters and poems by his wife Ann Cecil, his lover Ann Vavasor, his rival Sir Walter Raleigh, his tutor Sir Thomas Smith and others are brought to life by five other professional actors. Included as well are two madrigals that suggest Oxford’s style of composition plus examples of his own early poems and song lyrics.

In the UK and Europe:
Email: susancampbell_1@hotmail.com

In the US and Canada:
Send Money Order
$20 per 2CD set to
Stephanie Hughes
59 Depew Ave.
Nyack, NY 10960
info@politicworm.com

Don’t forget to include a mailing address. Please allow 2-4 weeks for shipping.

Oxford’s life has not been easy to trace. Whether this is due to the nature of the period (so long ago, so given to secrecy), to some idiosyncrasy of his nature––he was, as Gabriel Harvey put it, a “passing singular odd man”––or to some vocation that he felt he had to hide, apart from a few moments in the spotlight, mostly early in life, he remains more or less out of sight. He is most hidden during the latter half of his life, the period when it coincides with that of Shakespeare.

This highly condensed version of his life derives from biographies by J.T. Looney (1920), B.M. Ward (1929), Ruth Loyd Miller (1975), Charlton Ogburn, Jr. (1986), and Mark Anderson (2005), together with all available biographies of his friends, family, tutors, fellow courtiers and fellow writers, plus general and literary histories of the Renaissance/Reformation period. Those interested in pursuing him further can find titles in the Bibliography.

Born into one of the oldest and most prestigious families of the English aristocracy, de Vere was raised by the eminent Greek scholar and government minister Sir Thomas Smith, chiefly at Smith’s home on the Thames near Windsor and Eton. The death in 1562 of his father, the sixteenth Earl, caused the twelve-year-old Earl to be transferred to the care of William Cecil, later Lord Burghley, the Queen’s leading minister of state in his great London mansion.  Married at twenty-one to Cecil’s fifteen-year-old daughter Ann, Oxford spent his late teens and twenties at the Court of Queen Elizabeth I, except for a single year, his twenty-sixth, which he spent absorbing the culture of France and Italy.

Following his years of success at Court, by his early thirties he found himself banished for two years from the Queen’s Presence. From this point on he begins to disappear, little by little, from the records, until by the 1590s, he seems almost forgotten. By the early 90s, financial troubles, loss of credit, the death of his wife and old friends –– then by the end of the 90s, the death of the Queen, followed by the ascendance of his enemies at the Court of James I, contribute to his deepening silence. His final disappearance in 1604 has left us with more questions than answers. Unfortunately, the rest –– as Hamlet put it –– “is silence.”

What do the letters tell us about him and about the possibility that he wrote the Shakespeare canon? Listen and form your own conclusions.

Editing the Letters for a modern listener

The letters have been lightly edited where the meaning would otherwise be unclear to a modern listener. Sometimes a phrase has been cut that says the same thing as a second phrase, it being Oxford’s habit often to repeat himself by using two consecutive words or phrases that mean the same thing (not out of ignorance; it was a respected rhetorical device).  Names of minor characters have been cut. We have amended double negatives where necessary to clarify the meaning (everyone used double negatives in his time). In a handful of places the word order has been altered to conform with modern usage.

The narrator notes where syntax becomes incoherent under the stress of emotion. In an effort to convey this, we have modified it only to the extent that we believe necessary to allow the listener to understand what Oxford is saying.

Articles and prepositions were used very differently in the 16th century, so where understanding might be hurt, we have changed, added or deleted the outdated article or preposition (most often exchanging thatfor which and vice versa). In a handful of places we have replaced a word whose meaning has changed with a word commonly used today. We have occasionally altered the tense of a verb if not to do so would jeopardize understanding. The Elizabethans used verb tenses differently than we do today.

Frequent or occasional replacements include: by reason which we replace with because, unto with to, want with lack, advertise with inform, look for with expect, suffer with allow, and motion with suggestion. But has been removed where it’s confusing.

Like many educated letter-writers of the period, Oxford was inclined to sprinkle his letters with Latin phrases and aphorisms. These we have either cut or silently translated, as also several Italian phrases acquired during his time in Italy. These add interest to his writing but would probably confuse most English-speaking listeners today.

These few changes have been made purely so that what he is saying will be understood by a modern listener, not in any way to improve his language or our perception of his nature. Our purpose is to bring an interesting Renaissance writer in all his complexities and ideosyncrasies as close as we can to a modern audience.

Changes such as these all but disappear towards the end of his correspondence. They are simply not required. In short, Oxford “modernized” himself in his later years. The letters to the Cecils and James on the subject of the return of the keepership of the Forest require no tweaking, for although their subject is but a dull matter of property rights, we feel the language is, well, positively Shakespearean.

Only a handful of the scores of anonymous or dubiously identified poems that have come down to us from the Elizabethan period are currently “authenticated” as by Oxford by orthodox literary scholars. However, it must be noted that such judgements, based as they are purely on what skimpy bits of evidence have survived (and subjective responses to style) can hardly be considered definitive. It must also be kept in mind that, despite the popularity then of poetry as an avocation, particularly for the young and well-born, there were only a handful capable of Oxford’s quality and, of these, none it seems were capable of his variety.

All the poems that we can be certain are Oxford’s date from his teens and twenties (1562-1582), while Shakespeare’s poetry can’t begin any earlier than the 1590s (when Oxford was in his forties), well after the innovations of Sidney and Marlowe (1580-1587). The timing plus many similarities of themes and style suggest to Oxfordian scholars that the mature art of Shakespeare developed from the youthful experiments of Oxford (not from imitating younger, lesser writers).

Of the several dozen poems known or thought to be by Oxford, we include four on the CD: the first (“My good name”) dates from his fifteenth year, the second (“Content thyself with patience”) and third (“The stately dames of Rome”) come from the 1573 anthology, One Hundreth Sundrie Flowres, that, though later credited to George Gascoigne, was certainly mostly Oxford’s work from his early twenties or earlier. The fourth is clearly a song.

The Renaissance madrigal was, for a relatively short period, a favorite pastime of the elite social and intellectual circles that flourished primarily at the Court. Like most of the Renaissance arts, it was imported from Italy, where the vogue lasted longer and produced a great many more works than it did in England, where it coincided with the so-called sonnet craze; in fact, many madrigals were simply sonnets set to music.

Shakespeare was obviously musical. His plays are filled with musical metaphors and lyrics to songs. His musical metaphors rely to a great extent on his knowledge of stringed instruments and the principles of harmony. Unfortunately we can only guess the nature of the music that was played for the dances and “masks” in the wedding plays, since––apart from a few songs from plays produced in the 17th century, written by known composers––we have no idea of the tunes that matched his lyrics. No tune by Shakespeare, no notation in his hand or that bears his name, has come down to us.

The same is true of Oxford. But what we do know about Oxford, is that (unlike William of Stratford) he had a reputation for musical ability. The respected composer John Farmer, in dedicating his own books of madrigals to Oxford (1591, 1599), wrote: “Those that know your Lordship know this, that using this science as a recreation, your Lordship has overgone most of them that make it a profession.”  We know that as a teenager he studied dancing while living at Cecil House, which meant he was in a position to learn the lute, virginal, and other instruments from Court musicians.

Since we have only a handful of song lyrics as known examples of Oxford’s musical efforts, nothing in notation, we’ve chosen two madrigals from the period by composer Thomas Weelkes: “O Care thou wilt dispatch me” and “Thule, the period of cosmography.”

O Care, thou wilt despatch me,
If music do not match thee. Fa la.
So deadly dost thou sting me,
Mirth only help can bring me. Fa la.

Hence, Care, thou art too cruel,
Come, music, sick man’s jewel. Fa la.
His force had well nigh slain me,
But thou must now sustain me. Fa la.

Thule, the period of cosmography,
Doth vaunt of Hecla, whose sulphurious fire
Doth melt the frozen clime and thaw the sky;
Trinacrian Aetna’s flames ascend not higher:
These things seem wondrous, yet more wondrous I,
Whose heart with fear doth freeze, with love doth fry.

The Andalusian merchant, that returns
Laden with cochineal and China dishes,
Reports in Spain how strangely Fogo burns
Amidst an ocean full of flying fishes.
These things seem wondrous, yet more wondrous I,
Whose heart with fear doth freeze, with love doth fry.

Chris Whent, producer of “Here of a Sunday Morning” on New York’s WBAI, calls Weelkes one of England’s “finest composers,” one who “had the most restless, exploring musical imagination of any, achieving greater extremes of expression within the compass of one madrigal, as well as width of human experience.” Gustav Holst compared him to Shakespeare. Oxfordians Eric Lewin Altschuler and William Jansen believe that his music was, in fact, Shakespeare’s, that is Oxford’s, published under Weelkes’s name just as (per the Oxfordian thesis) Oxford’s plays and poems were published under the name “Shakespeare.”

William Plumer Fowler’s transcriptions of Oxford’s letters were borrowed from his book Shakespeare Revealed in Oxford’s Letters (published 1986 by Peter Randall), with a few quotations from The Seventeenth Earl of Oxford by B.M. Ward (1929) and from Monstrous Adversary by Alan H. Nelson (2003).